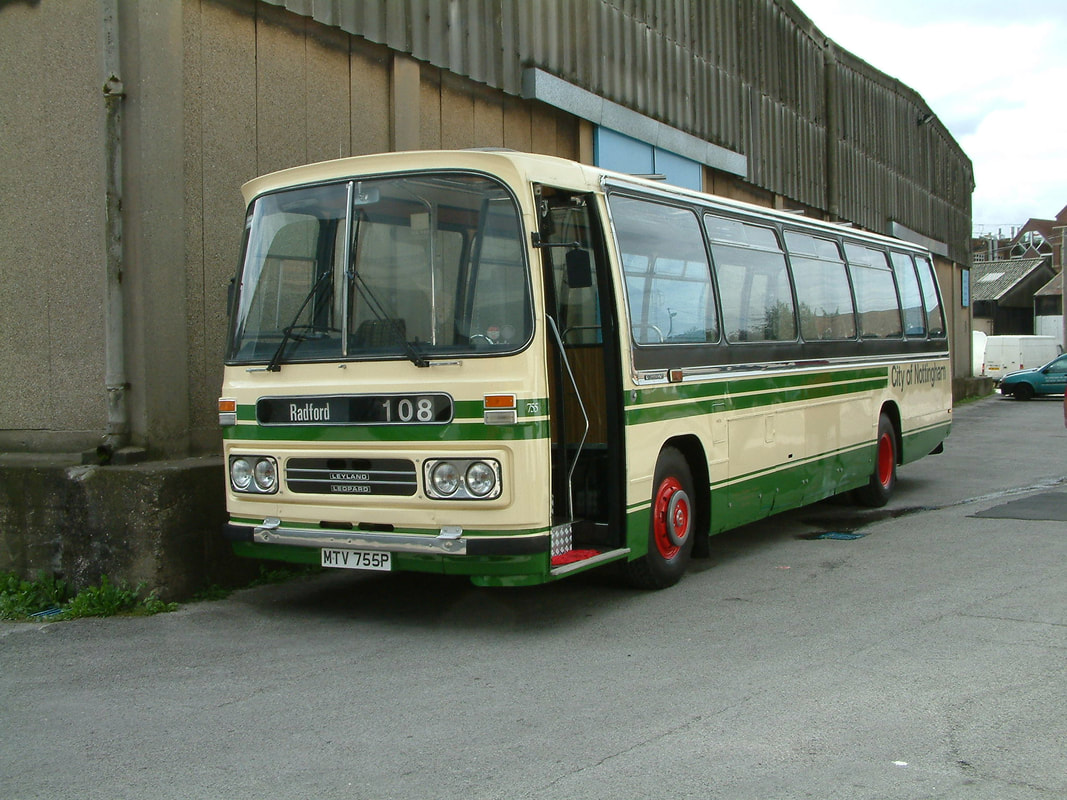 New To: - Nottingham City Transport
Chassis: - Leyland Leopard PSU3C/4R 7505575
Body: -    Duple Dominant E DP53F 634/5174
History
MTV 755P was delivered new to Nottingham City Transport in 1976. It was one a batch of 24 similar buses.
It is a Leyland Leopard Chassis, a very long lived and numerous type, supplied to many operators over a number of years.
It is fitted with a front entrance Duple Body, which seats 53 passengers. It is unusual in that despite it being a coach body shell, it is fitted with bus seats and has opening side windows.
It was bought to operate on park and ride services, but quickly found its way onto other routes.
Upon withdrawal it passed to Nottingham Polytechnic, and was converted to a mobile unit for the Women Into Science and Engineering project (WISE).
755 then passed to a group of people who further converted it as a mobile home, and used it to travel to the races at Le Mans for a couple of years.
It was then parked up at Tollerton, where sadly it was vandalised, with many windows being broken and panels damaged.
755 was then acquired by Mick Stanton, who extensively restored the vehicle back to a bus, and repainted it into Nottingham City Transport livery.
This vehicle was acquired by Nottingham Heritage Vehicles in 2016. An initial assessment revealed that whilst it was mechanically sound, the bodywork, constructed mainly from mild steel square sections, was suffering from extensive corrosion.
As such, 755 remains as a static exhibit, as it will need all internal and external panels removing, in order that the body structure can be repaired. This will need a large financial investment in the bus.


Relevance to Collection
Most of the NCT fleet was double deck, so this bus is an example of the few single decks bought by the company.
It is also noteworthy being fitted with a coach body with bus seats and opening windows, an unusual specification, which was only supplied to one other operator besides NCT.